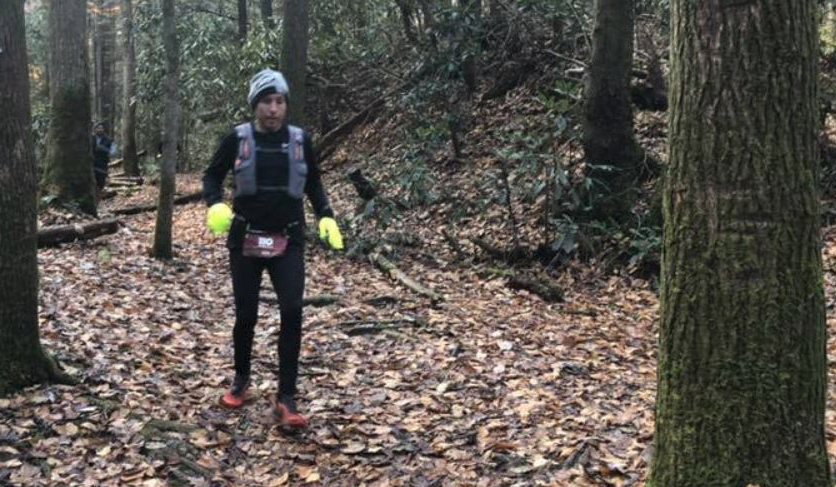 Pre-race warm up on course – Since an inch of rain had fallen earlier in the day – course was quite flooded in places, Poorly draining trails are common along the ridgetops here – temps were low 40’s and dropping fast (temp was 26 at race start the next morning). I ran in shorts and thin LS shirt and was fine – but decided tights and a thicker dry fit thermal shirt would be the safer bet for race. Lots of leaves down – so not really muddy – but slick, stairs at the Hidden arch were like ice (they would be ice in the morning). Felt good, right plantar was finally a non-issue. Finished run and back out and met up my family (off hiking what I had just run) and we headed to the RockHouse for some Burritos and sweet potato fries (and a KY bourbon Stout that hit the spot).

Typical pre-race nervous sleep for me. Woke on my own about 15 minutes before the 5 am alarm and ate a pre-race meal of coffee, Starbucks refresher and 5 Clif bars (since the race started at 7 am – I knew this would digest easily in allowed time and allow a burp-free first hour. Race start was 15 minutes away with very limited parking – so I got dressed – put on my CX breakaway warm-ups over my race kit – and a winter coat over that and threw my race pack into the car with post-race shoes and clothes and drove over and found that at 5 til 6 – I had beaten the rush and was rewarded a spot about 100 yds from the start/finish. I attempted a pre-race Port-o-let visit. (which did not yield what I had expected). This would be an issue I will cover later. I walked up to registration, signed in and went back to the car and cranked the heat. 10 minutes before race start, I jumped out – took off my non-race layers and ran up the hill to stand by the fire near the start. The mass of humanity there already and the fire kept me from freezing until I started moving.

At 7:02- we finally got the 10 count to the start – and I started running – following Matt Jourdan (as he’s done this distance before and knows how to pace) and Brian Spice(another IN veteran) – very quickly a group of about 20 hit the burners and get a gap on the paved road start(about 1/2 mile) – Matt initially sticks to the plan and we head out to the Hidden Arch(technical running/climbing) which comes at about mile 1.5 – down 3 different boat type stair flights and we are right below the Hidden Arch escarpment – Up a flight of stairs at the far end and then up the steep muddy/rooty rocky climb and we are back up on the Koomer ridge Trail – very quickly we hit mud…. a lot of mud…. mile 2 to mile 3.0 is all mud…. (and in my mind I’m thinking that after 350 pairs of feet run on this – it’s going to be really deep and crappy mud – as the first 3.0 is repeated as the last 3.0 miles) at Mile 3 we go left to Buck Trail as we quickly get to the first descent – which I recognize from Rugged Red 1/2 – except it’s way muddier and slicker now – I let Matt and Brian(more Matt) bomb away as I remember my upper thigh pain from dropping too hard at Techumseh my first ultra attempt a few weeks ago. I get to the bottom and cross the creek twice so mud that was on my shoes was washed away replaced with wet feet at 26F.

We immediately start climbing back up the 540 foot Auxier Ridge. At the top we take another left onto Pinch em tight trail and run along the top until mile 5.5 when we pop out onto Tunnel Ridge Road(dirt/gravel road atop Auxier Ridge) and proceed to run along this (exposed and windy) for the next 2.5 miles (crossing the NADA tunnel) – where we hit the first aid station at 8 miles and then head out on Auxier Ridge Trail – it was here that I caught back up with Brian Spice with Russ Goodwin just ahead of us…. somehow we lost sight of Russ and ended up down the wrong trail (poorly marked) I caught the mistake when I realized we should see Russ ahead and he was not there. So we backtracked and added about a mile at that point (1/2 hour 1/2 back) – Brian hit the jets while I was still in ‘early race’ mode – at about mile 10.5 we passed Courthouse rock and Double Arch – I dropped about 150 ft on boat stairs -(I can go downstairs pretty quickly) – and then dropped down another 150 or so on steep rocky trail – then lost another 200 ft running alongside a creek(Muddy trail) – we then headed back up and gained about 550 in 3/4 of a mile — at the top – we were back on Double Arch Trail (which is a packed lime hiking trail)- followed that till mile 13 (completing the loop and passing same aid station) – as I was back on Tunnel Ridge Road with Russ just ahead of me — AND THE SUN IS COMING OUT! THE WARMTH IS NICE! Followed Tunnel ridge back to Grays Arch area (about mile 16) where we started the really fun part of this race – In the next 13 miles, we would descent/ascend about 4000 feet (or 2/3 of the elevation total gain loss for this race) – Kids — do the math on this — that means divide by 2. – subtract the mile of ridgetop trail… we would climb 4000 ft in 6.0 miles — descend the same in 6.0 miles…. that’s a steep trail….

So at Gray’s arch parking lot – we drop down Boone Hut Trail take left when we get to Rough Trail(Dropping about 580 ft in the process) – and at mile 17.5 – hit the 3rd aid station (located on the side of the NADA tunnel road (now below where we had just been running) – At this point – we are told we are at the ‘halfway’ point — I enjoy a quick lunch of peanut butter and jelly, potato chips and Coke. – and name the stop – the ‘Halfway Cafe’ (which I find out later sticks….as several people refer to it in blog write-ups)…. at that point I proceed out solo again on Rough Trail – up the 580 ft to the top of Gray’s arch – where I notice ALOT of runners I had not seen before…. I realized at that point we have merged with the 25k race— so now I have boggies to chase down… We continue on Rough Trail now all the way to its terminus at Mile 26 – atop SkyBridge Road – Where we will reverse course and backtrack — until mile 28 when we proceed up Koomer Ridge trail for the final climb.

Atop Gray’s arch — The Sun is starting to get too warm. I’m thinking I should have filled my water bottles but I didn’t want to carry the extra weight. I’m still able to run when things level out but mostly it’s a fast steep hike uphill and a controlled rock hop downhill. The trail runs down an escarpment and there are MANY ‘trails to nowhere’ branching off these rock faces — all poorly marked — at this point I’m just focused on catching and passing the 25 k runners ahead of me – slow going up -and slow going down – finally get to mile 22 and recognize the Trail from Rugged Red – I know it drops down to the Chimney-top creek(wide and deep) – drop down the rooty/rocky descent and ‘wade’ thru the Creek that starts the out and back up over Chimney Top Rock Ridge and down and back up to Skybridge. At this point – the trail becomes a muddy mess – the double traffic on this out and back has destroyed it. I hit the Chimney-top Aid Station at mile 24 and filled my bottles and drank a Coke (or 2). Ate another PBJ half and started out for SkyBridge Checkpoint – caught up with Misha Morse(Bloomington) and ran (climbed) with her for a while – then on final climb moved ahead and finally made it to the CP and drank some more Coke….. Misha caught up and I started following her back down the climb — only to realize about halfway down that I need to stop and drop some weight… quickly — so grabbed the biodegradable wet wipes out of my pack and backed into the Rhododendron and proceed to drop about 10 lbs…. not exaggerating…. felt MUCH better — climbed back up to Chimney top — skipped the aid (and dropped back down what I know as the first drop of Rugged Red — which was even muddier now than just 30 minutes ago when I had climbed up it…

Made it back Chimney Creek — cleaned all the mud off my feet again – and proceed up Koomer Ridge — (all the time remembering that once I got to the ‘top’ it was going to be a muddy mess) – Finally took made the intersection where we had split away 5.5 hours earlier in the day — OH MY GOD…. It was like a herd of horses had run thru… at that point I just kept the feet moving – finally when I got closer to hidden arch it was less muddy – slid back down to hidden arch and finally made it back to the 3 flights of stairs — easily up and out — on the final mile – after running it and hiking it the afternoon before – it ACTUALLY seemed to be in better condition than it had been – (small victories) – made it back up the short grade after the camping parking area to the amphitheater where we had started and crossed the line — DONE! – 6 hours 42 minutes – 21st/160 3rd/33 50-59 AG –
Met Brian and Matt at the finish – Brian had hit the burners and caught Matt to finish ahead of him in 5:56 – Matt finished in 6:07. Russ finished in 6:31 – I had passed Misha at the last aid station – she came in just behind me in 6:49. I changed — ate some food at the finish line — and then headed back to the cabin so I could thaw out my feet —- as I could tell they were quite frozen.